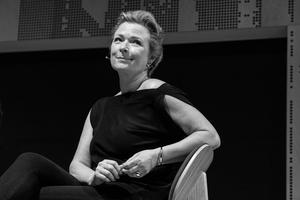 Helle Helle (born 1965 as Helle Olsen but later named Helle Krogh Hansen) is a widely translated Danish short story writer and novelist. Basing her stories on episodes in the lives of ordinary people, she gained fame in 2005 with her novel Rødby-Puttgarden. Now considered to be one of the most outstanding authors of contemporary Danish literature, since her novel This Should be Written in the Present Tense was published in English in 2014, she has also been acclaimed by American and British reviewers.
Read more or edit on Wikipedia