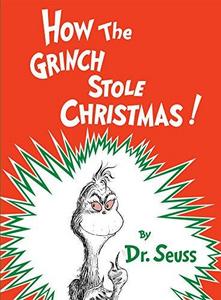 How the Grinch Stole Christmas!

How the Grinch Stole Christmas! is a children's story by Theodor "Dr. Seuss" Geisel written in rhymed verse with illustrations by the author. It follows the Grinch, a grouchy, solitary creature who attempts to put an end to Christmas by stealing Christmas gifts and decorations from the homes of the nearby town of Whoville on Christmas Eve. Miraculously, the Grinch realizes that Christmas is not all about money and presents. The story was published as a book by Random House in 1957, and at approximately the same time in an issue of Redbook. The book criticizes the commercialization of Christmas and the holiday season.The book has been adapted many times, first as a 1966 animated TV film narrated by Boris Karloff, who also provided the Grinch's voice in that production. In 1977, a Halloween prequel titled Halloween Is Grinch Night aired with the Grinch voiced by Hans Conried. These were followed with a 2000 live-action feature film starring Jim Carrey, a 2007 musical, a 2018 computer-animated film starring Benedict Cumberbatch, and a 2020 live television adaptation of the musical starring Matthew Morrison.
Read more or edit on Wikipedia

language: American English
date of publication: 1957
genre: children's literature, Christmas fiction
characters: Grinch
follows: If I Ran the Circus
followed by: The Cat in the Hat