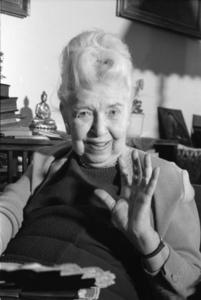 Mária Szepes (Hungarian pronunciation: [ˈmaːriɒ ˈsɛpɛʃ]; 14 December 1908 – 3 September 2007) was a Hungarian author. She worked as a journalist and screenwriter, as well as an independent author in the field of hermetic philosophy since 1941. She would sometimes write under the pseudonyms Mária Papir or Mária Orsi.
Read more or edit on Wikipedia