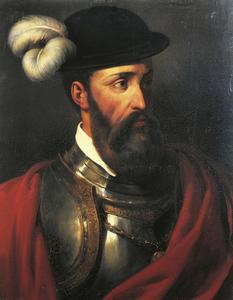 Francisco Pizarro González (; Spanish: [fɾanˈθisko piˈθaro]; c. 16 March 1478 – 26 June 1541) was a Spanish conquistador, best known for his expeditions that led to the Spanish conquest of Peru. Born in Trujillo, Spain to a poor family, Pizarro chose to pursue fortune and adventure in the New World. He went to the Gulf of Urabá, and accompanied Vasco Núñez de Balboa in his crossing of the Isthmus of Panama, where they became the first Europeans to see the Pacific Ocean from the Americas. He served as mayor of the newly founded Panama City for a few years and undertook two failed expeditions to Peru. In 1529, Pizarro obtained permission from the Spanish crown to lead a campaign to conquer Peru and went on his third, and successful, expedition. When local people who lived along the coast resisted this invasion, Pizarro moved inland and founded the first Spanish settlement in Peru, San Miguel de Piura. After a series of manoeuvres, Pizarro captured the Incan emperor Atahualpa at the Battle of Cajamarca in November 1532. A ransom for the emperor's release was demanded and Atahualpa filled a room with gold, but Pizarro charged him with various crimes and executed him in July 1533. The same year, Pizarro entered the Inca capital of Cuzco and completed his conquest of Peru. In January 1535, he founded the city of Lima. Pizarro eventually fell victim to political power struggles and was assassinated in 1541.
Read more or edit on Wikipedia