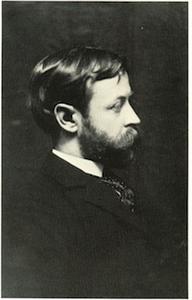 Henry Blake Fuller (January 9, 1857 – July 28, 1929) was a United States novelist and short story writer. He was born and worked in Chicago, Illinois. He is perhaps, the earliest novelist from Chicago to gain a national reputation. His exploration of city life was seen as revelatory, and later in his life he was perhaps the earliest established American author to explore homosexuality in fiction.
Read more or edit on Wikipedia