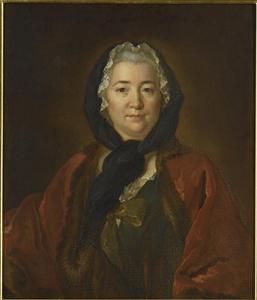 Françoise de Graffigny (née Françoise d'Issembourg du Buisson d'Happoncourt; 11 February 1695 – 12 December 1758), better known as Madame de Graffigny, was a French novelist, playwright and salon hostess. Initially famous as the author of Lettres d'une Péruvienne, a novel published in 1747, she became the world's best-known living woman writer after the success of her sentimental comedy Cénie in 1750. Her reputation as a dramatist suffered when her second play at the Comédie-Française, La Fille d'Aristide, was a flop in 1758, and even her novel fell out of favor after 1830. From then until the last third of the twentieth century, she was almost forgotten, but thanks to new scholarship and the interest in women writers generated by the feminist movement, Françoise de Graffigny is now regarded as a significant French writer of the eighteenth century.
Read more or edit on Wikipedia 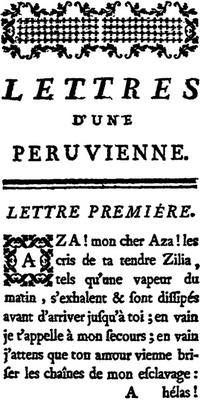 Letters from a Peruvian Woman