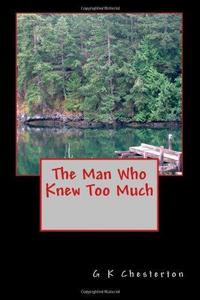 The Man Who Knew Too Much

The Man Who Knew Too Much and other stories (1922) is a book of detective stories by English writer G. K. Chesterton, published in 1922 by Cassell and Company in the United Kingdom, and Harper Brothers in the United States. The book contains eight connected short stories about "The Man Who Knew Too Much", and additional unconnected stories featuring separate heroes/detectives. The United States edition contained one of these additional stories: "The Trees of Pride", while the United Kingdom edition contained "Trees of Pride" and three more, shorter stories: "The Garden of Smoke", "The Five of Swords" and "The Tower of Treason". The 1934 film and its 1956 remake have nothing except the title in common with this book. Alfred Hitchcock, who directed both films, decided to use the title because he held the film rights for some of the book's stories.
Read more or edit on Wikipedia

The Man Who Knew Infinity: A Life of the Genius Ramanujan

The fan who knew too much : Aretha Franklin, the rise of the soap opera, children of the gospel church and other meditations

The land of too much

The Reporter Who Knew Too Much

The Women Who Knew Too Much: Hitchcock and Feminist Theory

The Dog Who Loved Too Much

Meditations for cats who do too much