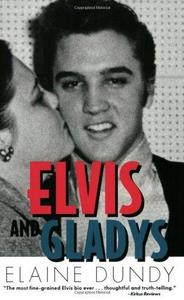 Elvis and Gladys (ISBN 1-57806-634-4) is a biography of rock and roll singer Elvis Presley by author and film industry insider, Elaine Dundy. The book recounts Presley's early life, the role his mother Gladys played in his formative years, and his beginnings in recorded music and film. Hardcover edition published in the United States in 1985 by MacMillan Publishing Company, New York. ISBN 0-02-553910-8. It was reissued in paperback in 2004 by the University Press of Mississippi. Widely acclaimed, the Boston Globe called it "Nothing less than the best Elvis book yet" and Kirkus Reviews, "The most fine-grained Elvis bio ever."The biopic which depicted Elvis' relationship with Gladys is featured in the TV series Elvis (2005), which starred Jonathan Rhys Meyers as Elvis and Camryn Manheim as Gladys. Dundy in the book claims that Elvis's great-great grandmother Nancy Burdine Tacket was Jewish, citing one of Elvis's third cousins, Oscar Tackett.
Read more or edit on Wikipedia

The Words and Music of Elvis Costello

Elvis and the Memphis Mafia

Way Down: Playing Bass with Elvis, Dylan, the Doors and More

Elvis and the colonel

I saw Elvis in my ultrasound