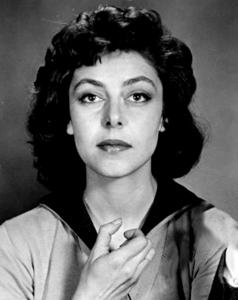 Elaine Iva May (née Berlin; born April 21, 1932) is an American comedian, film director, screenwriter, playwright, and actress. She made her initial impact in the 1950s with her improvisational comedy routines with Mike Nichols, performing as Nichols and May. After studying acting in Los Angeles under Maria Ouspenskaya, May moved to Chicago in 1955 with seven dollars to her name, and became a founding member of the Compass Players, an improvisational theater group. She began working alongside Nichols, who was also in the group, and together they began writing and performing their own comedy sketches, which were enormously popular. In 1957, they both quit the group to form their own stage act, Nichols and May, in New York. Producer Jack Rollins said their act was "so startling, so new, as fresh as could be. I was stunned by how really good they were.": 340  They performed nightly in clubs in Greenwich Village alongside Joan Rivers and Woody Allen to the mostly sold-out shows on the Broadway stage, in addition to making TV appearances and radio broadcasts. In their comedy act, they created satirical clichés and character types which made fun of the new intellectual, cultural, and social order that was just emerging at the time. In doing so, May was instrumental in removing the stereotype of women being unable to succeed at live comedy. Together, Nichols and May became an inspiration to many younger comedians, including Lily Tomlin and Steve Martin. They released multiple comedy albums and received four Grammy Award nominations winning Best Comedy Album for An Evening with Mike Nichols and Elaine May in 1962. After four years, at the height of their fame, May decided to discontinue their act; she wanted to take more risks with improvisation whereas Nichols wanted to perfect the form and also direct. It also took too great an emotional toll on them both. May became a screenwriter and playwright, along with acting and directing. Their relatively brief time together as comedy stars led New York talk show host Dick Cavett to call their act "one of the comic meteors in the sky." Woody Allen declared, “the two of them came along and elevated comedy to a brand-new level". Journalist Gerald Nachman noted that "Nichols and May are perhaps the most ardently missed of all the satirical comedians of their era.": 319  Together, they were the topic of a PBS documentary Nichols and May: Take Two (1996). May starred in films infrequently throughout her career including Luv (1967), Enter Laughing (1967), and California Suite (1978). It was during this time that she became the first female director with a Hollywood deal since Ida Lupino when she directed the black screwball comedy, A New Leaf (1971), in which she also starred opposite Walter Matthau. She broke the mold experimenting with genres directing a string of critically acclaimed films including her dark romantic comedy, The Heartbreak Kid (1972) starring Charles Grodin, Cybill Shepherd, and her daughter Jeannie Berlin; and her gritty gangster film, Mikey and Nicky (1976), starring John Cassavetes and Peter Falk. May has received her first Academy Award for Best Adapted Screenplay nomination for Warren Beatty's comedy Heaven Can Wait (1978). Additionally, May wrote and directed Ishtar (1987), starring Beatty and Dustin Hoffman to generally poor reception. She reunited with Nichols, with her writing the screenplays for and he directing The Birdcage (1996) and Primary Colors (1998). She received a Writers Guild Award nomination and won a British Academy Film Award. In 2013, May received the National Medal of Arts for her lifetime contributions to American comedy which was presented to her by President Barack Obama. In 2018, May returned to the Broadway stage after a 60-year absence in Lila Neugebauer's revival of Kenneth Lonergan's play The Waverly Gallery which ran at the John Golden Theatre, the same theatre where Nichols and May starred almost 60 years prior. May received rapturous reviews for her performance, and won the 2019 Tony Award for Best Actress in a Play, becoming the second oldest performer to win a Tony Award for acting. In 2021, it was announced by the Academy of Motion Pictures Arts and Sciences that May will be awarded the Honorary Academy Award for her "bold, uncompromising approach to filmmaking, as a writer, director, and actress".
Read more or edit on Wikipedia