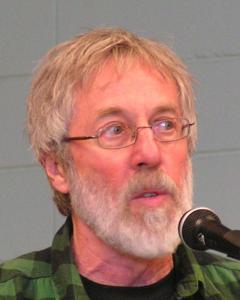 John Zerzan ( ZUR-zən; born August 10, 1943) is an American anarchist and primitivist ecophilosopher and author. His works criticize agricultural civilization as inherently oppressive, and advocates drawing upon the ways of life of hunter-gatherers as an inspiration for what a free society should look like. Subjects of his criticism include domestication, language, symbolic thought (such as mathematics and art) and the concept of time. His six major books are Elements of Refusal (1988), Future Primitive and Other Essays (1994), Running on Emptiness (2002), Against Civilization: Readings and Reflections (2005), Twilight of the Machines (2008), and Why hope? The Stand Against Civilization (2015).
Read more or edit on Wikipedia