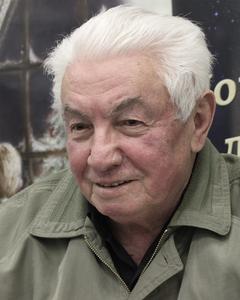 Vladimir Nikolayevich Voinovich (Russian: Влади́мир Никола́евич Войно́вич, 26 September 1932 – 27 July 2018), was a Russian writer and former Soviet dissident. Among his most well-known works are the satirical epic The Life and Extraordinary Adventures of Private Ivan Chonkin and the dystopian Moscow 2042. He was forced into exile and stripped of his citizenship by Soviet authorities in 1980 but later rehabilitated and moved back to Moscow in 1990. After the fall of the Soviet Union, he continued to be an outspoken critic of Russian politics under the rule of Vladimir Putin.
Read more or edit on Wikipedia