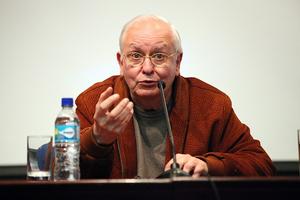 Ernesto Laclau (Spanish: [laˈklaw]; 6 October 1935 – 13 April 2014) was an Argentine political theorist and philosopher. He is often described as an 'inventor' of post-Marxist political theory. He is well known for his collaborations with his long-term partner, Chantal Mouffe. He studied History in Buenos Aires, graduating from the University of Buenos Aires in 1964, and received a PhD from the University of Essex in 1977. Since 1986 he served as Professor of Political Theory at the University of Essex, where he founded and directed for many years the graduate programme in Ideology and Discourse Analysis, as well as the Centre for Theoretical Studies in the Humanities and the Social Sciences. Under his directorship, the Ideology and Discourse Analysis programme has provided a research framework for the development of a distinct type of discourse analysis that draws on post-structuralist theory (especially the work of Saussure, and Derrida), post analytic thought (Wittgenstein, and Richard Rorty) and psychoanalysis (primarily the work of Lacan) to provide innovative analysis of concrete political phenomena, such as identities, discourses and hegemonies. This theoretical and analytical orientation is known today as the 'Essex School of discourse analysis'.Over his career Laclau lectured extensively in many universities in North America, South America, Western Europe, Australia, and South Africa. He also held positions at SUNY Buffalo and Northwestern University, both in the US. Laclau died of a heart attack in Seville in 2014.
Read more or edit on Wikipedia