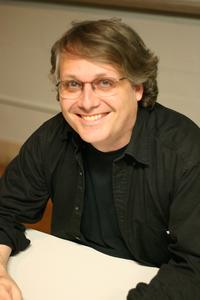 American cartoonist and comics theorist (b. 1960)

Scott McCloud (born Scott McLeod on June 10, 1960) is an American cartoonist and comics theorist. He is best known for his non-fiction books about comics: Understanding Comics (1993), Reinventing Comics (2000), and Making Comics (2006), all of which also use the medium of comics. He established himself as a comics creator in the 1980s as an independent superhero cartoonist and advocate for creator's rights. He rose to prominence in the industry beginning in the 1990s for his non-fiction works about the medium, and has advocated the use of new technology in the creation and distribution of comics.
Read more or edit on Wikipedia