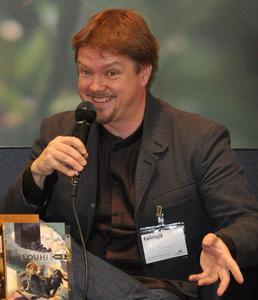 Timo Parvela (born 19 May 1964 in Jyväskylä) is a Finnish author of juvenile fiction. Parvela matriculated from secondary school in 1983 and graduated from Jyväskylä Teacher Training College in 1988. He worked at a series of elementary school teaching posts for six years — first in Petäjävesi in the Jyväskylä sub-region and later in Espoo — until the mid-1990s. Since 1996 he has been a freelance writer. In addition to numerous children's books he has written television screenplays both for children's audiences and for adults, as well as scripts for Finnish radio.
Read more or edit on Wikipedia