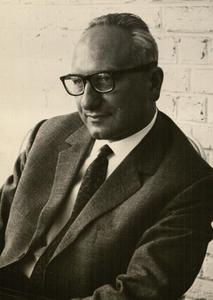 Chaïm Perelman (born Henio (or Henri) Perelman; sometimes referred to mistakenly as Charles Perelman) (20 May 1912, Warsaw – 22 January 1984, Brussels) was a Polish-born philosopher of law, who studied, taught, and lived most of his life in Brussels. He was among the most important argumentation theorists of the twentieth century. His chief work is the Traité de l'argumentation – la nouvelle rhétorique (1958), with Lucie Olbrechts-Tyteca, translated into English as The New Rhetoric: A Treatise on Argumentation, by John Wilkinson and Purcell Weaver (1969).
Read more or edit on Wikipedia