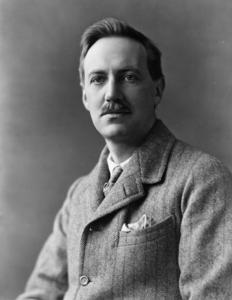 Edward John Moreton Drax Plunkett, 18th Baron of Dunsany (; 24 July 1878 – 25 October 1957, usually Lord Dunsany) was an Anglo-Irish writer and dramatist. Over 90 volumes of short stories, novels, essays, poems and plays appeared in his lifetime,: 29 (I.A.92)  and material continues to appear since. Early work gave him a name in the 1910s as a great writer of the English-speaking world. Best known today are the 1924 fantasy novel, The King of Elfland's Daughter, and his first book, The Gods of Pegāna, which brings tales about a fictional pantheon. Many critics feel his early work in particular laid important grounds for the fantasy genre. Born in London as heir to one of the oldest Irish peerages, and raised there and in Kent, he later lived mainly at Ireland's possibly longest inhabited home, Dunsany Castle near Tara. He worked with W. B. Yeats and Lady Gregory, and supported the Abbey Theatre and a number of fellow writers. He was a chess and pistol champion of Ireland, and travelled and hunted. He devised an asymmetrical version called Dunsany's chess. In later life he was awarded an honorary doctorate from Trinity College, Dublin. He retired to Shoreham, Kent in 1947. In 1957 he took ill when visiting Ireland and died in Dublin of appendicitis.
Read more or edit on Wikipedia