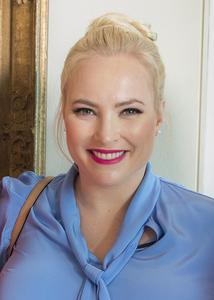 Meghan Marguerite McCain (born October 23, 1984) is an American television personality, conservative columnist, and author. She has worked for ABC News, Fox News, and MSNBC. The daughter of politician John McCain and diplomat Cindy McCain, she has been a public figure for much of her life, first appearing at the 1996 Republican National Convention. McCain received media attention of her own accord in 2007 for her blog, McCain Blogette, on which she documented life on the campaign trail during her father's 2008 presidential campaign. In 2009, she became a contributing writer for The Daily Beast. From 2016 to 2017, she co-hosted the daytime talk show Outnumbered, after which she joined the daytime talk show The View also as co-host until 2021. McCain became a columnist for the Daily Mail newspaper following her departure from The View.
Read more or edit on Wikipedia