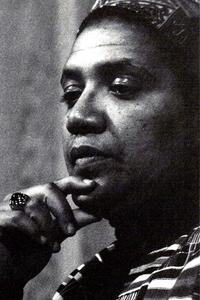 Audre Lorde (; born Audrey Geraldine Lorde; February 18, 1934 – November 17, 1992) was an American writer, feminist, radical feminist, womanist, librarian, and civil rights activist. She was a self-described "black, lesbian, mother, warrior, poet," who "dedicated both her life and her creative talent to confronting and addressing injustices of racism, sexism, classism, and homophobia."As a poet, she is best known for technical mastery and emotional expression, as well as her poems that express anger and outrage at civil and social injustices she observed throughout her life. As a spoken word artist, her delivery has been called powerful, melodic, and intense by the Poetry Foundation. Her poems and prose largely deal with issues related to civil rights, feminism, lesbianism, illness and disability, and the exploration of black female identity.
Read more or edit on Wikipedia