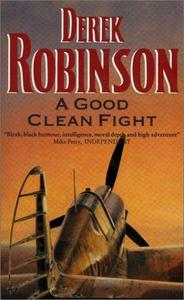 A Good Clean Fight is a 1993 novel by Derek Robinson, and a sequel to Piece of Cake (1983), his famous and controversial novel of the Battle of Britain. It continues the story of RAF Hornet Squadron, now posted to North Africa in 1942, during a lull in the fighting. Some of the characters from the previous novel, such as Squadron Leader "Fanny" Barton and erudite but iconoclastic intelligence officer "Skull" Skelton, reprise their roles. As the squadron engages in increasingly suicidal ground attacks in an effort to lure the Luftwaffe into a fight, Captain Jack Lampard leads an SAS patrol behind enemy lines and Paul Schramm, a German intelligence officer, tries to concoct his own scheme to beat the SAS at their own game.
Read more or edit on Wikipedia

The Good Fight: A Life in Liberal Politics