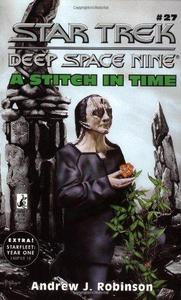 A Stitch in Time

A Stitch in Time (ISBN 0-671-03885-0), published June 5, 2000, is a Star Trek: Deep Space Nine novel written by Andrew Robinson. The novel originated from a biography of Cardassian Elim Garak in the form of a diary which was written by Robinson after he landed the recurring role in the series. He would read extracts from it at Star Trek conventions for fans, and was heard by novelist David R. George III, who suggested he should submit it for publishing. Although it was announced that a sequel would be published in 2001, co-written by fellow actor Alexander Siddig, the only follow-up to the novel was Robinson's short story The Calling which was published as part of the Prophecy and Change anthology in 2003.
Read more or edit on Wikipedia