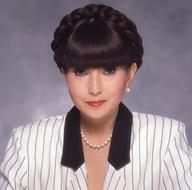 Tetsuko Kuroyanagi (黒柳 徹子, Kuroyanagi Tetsuko, born August 9, 1933) is a Japanese actress, voice actress, tarento, World Wide Fund for Nature advisor, and Goodwill Ambassador for UNICEF. She is well known for her charitable works, and is considered one of the first Japanese celebrities to achieve international recognition. In 2006, Donald Richie referred to Kuroyanagi in his book Japanese Portraits: Pictures of Different People as "the most popular and admired woman in Japan." Source: Wikipedia (en)