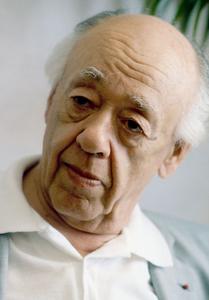 Eugène Ionesco (French: [øʒɛn jɔnɛsko]; born Eugen Ionescu, Romanian: [e.uˈdʒen joˈnesku] (listen); 26 November 1909 – 28 March 1994) was a Romanian-French playwright who wrote mostly in French, and was one of the foremost figures of the French avant-garde theatre in the 20th century. Ionesco instigated a revolution in ideas and techniques of drama, beginning with his "anti play", The Bald Soprano. Ionesco contributed to the beginnings of what is known as the Theatre of the Absurd, which includes a number of plays that, following the ideas of the philosopher Albert Camus, explore concepts of absurdism. He was made a member of the Académie française in 1970, and was awarded the 1970 Austrian State Prize for European Literature, and the 1973 Jerusalem Prize.
Read more or edit on Wikipedia