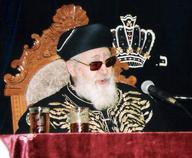 Ovadia Yosef (Hebrew: עובדיה יוסף‎, romanized: Ovadya Yosef, Arabic: عبد الله يوسف, romanized: Abdullah Yusuf; September 24, 1920 – October 7, 2013) was an Iraqi-born Talmudic scholar, a posek, the Sephardi Chief Rabbi of Israel from 1973 to 1983, and a founder and long-time spiritual leader of Israel's ultra-Orthodox Shas party. Yosef's responsa were highly regarded within Haredi circles, particularly among Mizrahi communities, among whom he was regarded as "the most important living halakhic authority". He was however condemned for making numerous offensive statements about his opponents which made him a controversial figure in his later years. Source: Wikipedia (en)