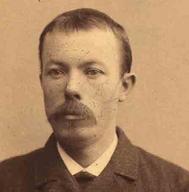 Arne Garborg (born Aadne Eivindsson Garborg) (25 January 1851 – 14 January 1924) was a Norwegian writer. Garborg championed the use of Landsmål (now known as Nynorsk, or New Norwegian), as a literary language; he translated the Odyssey into it. He founded the weekly Fedraheimen in 1877, in which he urged reforms in many spheres including political, social, religious, agrarian, and linguistic. He was married to Hulda Garborg. He was nominated for the Nobel Prize in Literature six times. Source: Wikipedia (en)