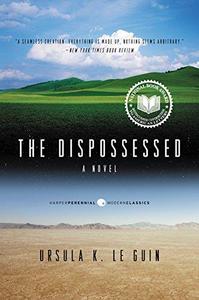 The Dispossessed: An Ambiguous Utopia is a 1974 utopian science fiction novel by American writer Ursula K. Le Guin, set in the fictional universe of the seven novels of the Hainish Cycle, e.g. The Left Hand of Darkness, about anarchist and other societal structures. The book won the Nebula Award for Best Novel in 1974, won both the Hugo and Locus Awards in 1975, and received a nomination for the John W. Campbell Memorial Award in 1975. It achieved a degree of literary recognition unusual for science fiction due to its exploration of themes such as anarchism (on a planet called Anarres) and revolutionary societies, capitalism, and individualism and collectivism. It features the development of the mathematical theory underlying the fictional ansible, an instantaneous communications device that plays a critical role in Le Guin's novels in the Hainish Cycle. The invention of the ansible places the novel first in the internal chronology of the Hainish Cycle, although it was the fifth published.
Read more or edit on Wikipedia