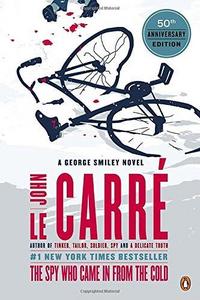 The Spy Who Came in from the Cold

The Spy Who Came In from the Cold is a 1963 Cold War spy novel by the British author John le Carré. It depicts Alec Leamas, a British agent, being sent to East Germany as a faux defector to sow disinformation about a powerful East German intelligence officer. It serves as a sequel to le Carré's previous novels Call for the Dead and A Murder of Quality, which also featured the fictitious British intelligence organization the Circus and its agents George Smiley and Peter Guillam. The Spy Who Came In from the Cold portrays Western espionage methods as morally inconsistent with Western democracy and values. The novel received critical acclaim at the time of its publication and became an international best-seller; it was selected as one of the All-Time 100 Novels by Time magazine.In 1965, Martin Ritt directed the cinematic adaptation The Spy Who Came In from the Cold, with Richard Burton as Leamas.
Read more or edit on Wikipedia