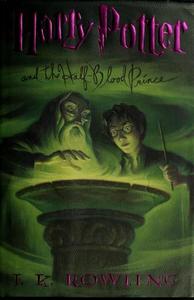 Harry Potter and the Half-Blood Prince

Harry Potter and the Half-Blood Prince is a fantasy novel written by British author J.K. Rowling and the sixth and penultimate novel in the Harry Potter series. Set during Harry Potter's sixth year at Hogwarts, the novel explores the past of Harry's nemesis, Lord Voldemort, and Harry's preparations for the final battle against Voldemort alongside his headmaster and mentor Albus Dumbledore. The book was published in the United Kingdom by Bloomsbury and in the United States by Scholastic on 16 July 2005, as well as in several other countries. It sold nine million copies in the first 24 hours after its release, a record that was eventually broken by its sequel, Harry Potter and the Deathly Hallows. There were many controversies before and after it was published, including the right to read copies delivered before the release date in Canada. Reception to the novel was generally positive, and it won several awards and honours, including the 2006 British Book of the Year award. Reviewers noted that the book took on a darker tone than its predecessors, though it did contain some humour. Some considered the main themes to be love, death, trust, and redemption. The considerable character development of Harry and many other teenage characters also drew attention. The film adaptation of Harry Potter and the Half-Blood Prince was released 15 July 2009 by Warner Bros.
Read more or edit on Wikipedia