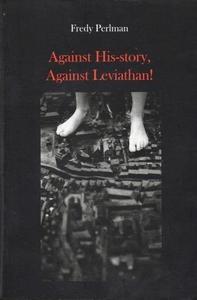 Against His-Story, Against Leviathan!

Against His-Story, Against Leviathan! is a 1983 book by Fredy Perlman, for which he is best known. It is a personal critical perspective on contemporary civilization and society. The work defined anarcho-primitivism for the first time, and was a major source of inspiration for anti-civilization perspectives in contemporary anarchism, most notably on the thought of philosopher John Zerzan. In 2006 the book was translated into French under the title Contre le Léviathan, contre sa légende and into Turkish as Er-Tarih’e Karşı, Leviathan’a Karşı. In 2019 it was translated into Spanish as Contra el Leviatán y contra su historia.
Read more or edit on Wikipedia