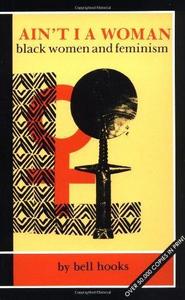 Ain't I a Woman? Black Women and Feminism is a 1981 book by bell hooks titled after Sojourner Truth's "Ain't I a Woman?" speech. Hooks examines the effect of racism and sexism on black women, the civil rights movement, and feminist movements from suffrage to the 1970s. She argues that the convergence of sexism and racism during slavery contributed to black women having the lowest status and worst conditions of any group in American society. White female abolitionists and suffragists were often more comfortable with black male abolitionists such as Frederick Douglass, while southern segregationalists and stereotypes of black female promiscuity and immorality caused protests whenever black women spoke. Hooks points out that these white female reformers were more concerned with white morality than the conditions these morals caused black Americans.Further, she argues that the stereotypes that were set during slavery still affect black women today. She argued that slavery allowed white society to stereotype white women as the pure goddess virgin and move black women to the seductive whore stereotype formerly placed on all women, thus justifying the devaluation of black femininity and rape of black women. The work which black women have been forced to perform, either in slavery or in a discriminatory workplace, that would be non-gender conforming for white women has been used against black women as a proof of their emasculating behaviour. bell hooks argues that black nationalism was largely a patriarchal and misogynist movement, seeking to overcome racial divisions by strengthening sexist ones, and that it readily latched onto the idea of the emasculating black matriarch proposed by Daniel Patrick Moynihan, whose theories bell hooks often criticizes. Meanwhile, she says, the "feminist movement", a largely white middle and upper class affair, did not articulate the needs of poor and non-white women, thus reinforcing sexism, racism, and classism. She suggests this explains the low numbers of black women who participated in the feminist movement in the 1970s, pointing to Louis Harris' Virginia Slims poll done in 1972 for Philip Morris that she says showed 62 percent of black women supported "efforts to change women's status" and 67 percent "sympathized with the women's rights movement", compared with 45 and 35 percent of white women (also Steinem, 1972). Since its publication, Ain't I a Woman has been critically acclaimed as groundbreaking in the study of feminist theory for discussing the correlation between the history of oppression black women have faced in the United States and its lingering effects in modern American society. The book is commonly used in gender studies, Black studies, and philosophy courses.
Read more or edit on Wikipedia