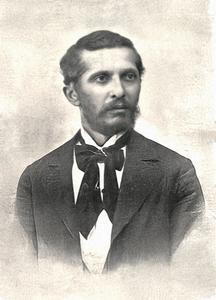 Naim Bey Frashëri, more commonly Naim Frashëri (; pronounced [naˈim fɾaˈʃəˈɾi]; 25 May 1846 – 20 October 1900), was an Albanian patriot, historian, journalist, poet, rilindas and translator who was proclaimed national poet of Albania. He is regarded as the pioneer of modern Albanian literature and one of the most influential Albanian cultural icons of the 19th century.Naim and his brothers Abdyl and Sami were born and raised in the village of Frashër at the southern slopes of the Tomorr Mountains. He became acquainted with numerous cultures and languages such as Arabic, Ancient and Modern Greek, French, Italian, Ottoman Turkish and Persian. He was one of the few men to whom the literary culture of the Occident and Orient was equally familiar and valuable.Upon the death of his father, he and his family settled to Ioannina where he earned initial inspiration for his future poetries written in the lyric and romantic style. After he suffered a severe lung infection, due to his congenital tuberculosis, in Constantinople, he joined his brother Abdyl in the fight for national freedom and consciousness of the Albanian people during the Albanian Renaissance in which he later became the most distinguished representative of that period.Frashëri's masterpieces explored themes such as freedom, humanity, unity, tolerance and revolution. His extant works include twenty two works composed of fifteen works written in Albanian as well as four in Turkish, two in Greek and one in Persian, accessible to an audience beyond Albania. He is the most representative writer of sufi poetry in Albanian, being under the influence of his uncle Dalip Frashëri, he tried to mingle sufism with western philosophy in his poetical ideals. He had an extraordinarily profound impact on the Albanian literature and society during the 20th century most notably on Asdreni, Gjergj Fishta and Lasgush Poradeci, among many others.Ti Shqipëri, më jep nder, më jep emrin Shqipëtar, a memorable line in his poem O malet e Shqipërisë, has been designated as the national motto of Albania. It speaks to unity, freedom and it embodies in its words a sense of pride towards country and people.
Read more or edit on Wikipedia 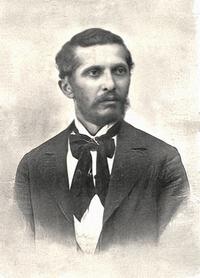