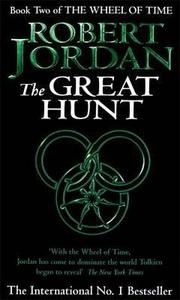 The Great Hunt is a fantasy novel by American author Robert Jordan, the second book of The Wheel of Time series. It was published by Tor Books and released on November 15, 1990. The Great Hunt consists of a prologue and 50 chapters. In 2004 The Great Hunt was re-released as two separate books, The Hunt Begins and New Threads in the Pattern. The story features young heroes Rand al'Thor, Mat Cauthon, and Perrin Aybara, who join Shienaren soldiers in a quest to retrieve the Horn of Valere. At the same time, Egwene al'Vere, Nynaeve al'Meara, and Elayne Trakand go to the White Tower in Tar Valon to learn Aes Sedai ways. Finally, an exotic army invades the western coast.
Read more or edit on Wikipedia

part of the series: The Wheel of Time
series ordinal: 2
original title: The Great Hunt
date of publication: 1990
genre: speculative fiction novel
narrative location: The Wheel of Time universe
characters: Rand al'Thor
follows: The Eye of the World
followed by: The Dragon Reborn