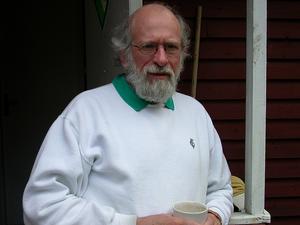 Alan Lelchuk is a novelist, professor, and editor from Brooklyn, New York. He received his B.A. in World Literature from Brooklyn College in 1960, studied at University College in 1962–63, and received his M.A. in 1963 and Ph.D. in 1965, both in English and from Stanford University.His short fiction has appeared in such publications as Transatlantic Review, The Atlantic, Modern Occasions, The Boston Globe Magazine, and Partisan Review. Significant critical studies on Lelchuk have been Philip Roth in Esquire, Wilfrid Sheed in Book-of-the-Month Club News, Bejmain DeMott in The Atlantic, Mordechai Richler in the Chicago Tribune, Robert Towers in The New York Times, and Steven Birkets in The New Republic. He began teaching at Brandeis University in 1966, was Visiting Writer for two years at Amherst College, from 1982 to 1984, and has been a member of the Dartmouth College faculty since 1985.Some awards, honors, and citations include: a Yaddo Foundation Grant in 1968, 1969, 1971, and 1973, a MacDowell Colony Fellowship in 1969 and 1974, a Guggenheim Fellowship in Fiction in 1976–1977, and Fulbright Writer-in-Residence at the University of Haifa, Israel in 1986–1987. In 1999-2000 he was the recipient of the Otto Salgo Chair in American Literature and Writing at Eötvös Loránd University (ELTE) in Budapest, Hungary. In 2003-2004 he received a Fulbright Scholar's Grant and taught at the International University of Moscow.In 2005 he was a Fulbright Senior Specialist Professor, giving seminars in fiction writing and American Literature at Moscow State University, Universita di Napoli (Naples, Italy), and Die Freie Universität, Berlin. He has also served as a visiting professor at the University of Rome, New York City College, and been in residence at Mishkenot Sha'ananim in Jerusalem. He has given readings and lectures at numerous institutions such as Harvard University, Yale University, Dartmouth College, Brandeis University, the Boston Public Library, Boston University, Amherst College, and the American Cultural Center (Tel Aviv, Israel). His manuscripts are housed as "The Alan Lelchuk Manuscript Collection" in the Howard Gotlieb Research Center in the Mugar Memorial Library at Boston University.In 1994 he co-founded Steerforth Press, and is a member of the independent publisher's editorial board. He lives in the countryside of New Hampshire.
Read more or edit on Wikipedia