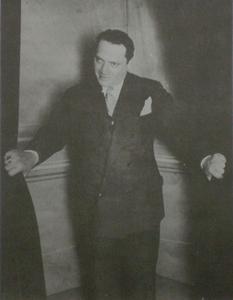 Bartolomé Ángel Venancio Alberto Vaccarezza (1886–1959) was an Argentine poet and playwright. Vaccarezza was born in Buenos Aires on April 1, 1886. He is usually credited as the foremost exponent of the sainete genre, having written its most popular play, El Conventillo de La Paloma (The La Paloma Tenement). He was a friend and collaborator of Carlos Gardel, and pronounced his eulogy when Gardel was interred at La Chacarita Cemetery. Besides his literary activities, he presided over Argentores (the national playwright guild) and Casa del Teatro (House of Theater, a beneficent organization that hosts impoverished retired actors). He died in Buenos Aires, on August 6, 1959.
Read more or edit on Wikipedia