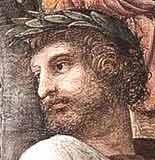 Quintus Ennius (Latin pronunciation: [ˈkᶣiːnt̪ʊs̺ ˈɛnːiʊs̺]; c. 239 – c. 169 BC) was a writer and poet who lived during the Roman Republic. He is often considered the father of Roman poetry. He was born in Rudiae, formerly a small town located near modern Lecce in the heel of Italy (ancient Calabria, today Salento), and could speak Oscan as well as Latin and Greek. Although only fragments of his works survive, his influence in Latin literature was significant, particularly in his use of Greek literary models.
Read more or edit on Wikipedia