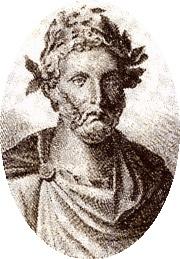 Titus Maccius Plautus (; c. 254 – 184 BC), commonly known as Plautus, was a Roman playwright of the Old Latin period. His comedies are the earliest Latin literary works to have survived in their entirety. He wrote Palliata comoedia, the genre devised by the innovator of Latin literature, Livius Andronicus. The word Plautine refers to both Plautus's own works and works similar to or influenced by his.
Read more or edit on Wikipedia