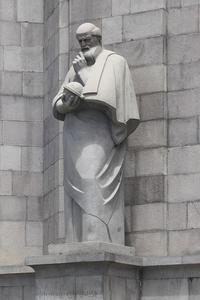 Anania Shirakatsi (Armenian: Անանիա Շիրակացի, Anania Širakac’i, anglicized: Ananias of Shirak) was a 7th-century Armenian polymath and natural philosopher, author of extant works covering mathematics, astronomy, geography, chronology, and other fields. Little is known for certain of his life outside of his own writings, but he is considered the father of the exact and natural sciences in Armenia—the first Armenian mathematician, astronomer, and cosmographer.Seen as a part of the Armenian Hellenizing School, the last lay scholar in Christian Armenia until the 11th century, Anania was educated primarily by Tychicus, in Trebizond. He composed science textbooks and the first known geographic work in classical Armenian (Ashkharhatsuyts), which provides detailed information about Greater Armenia, Persia and the Caucasus (Georgia and Caucasian Albania). In mathematics, his accomplishments include the earliest known table of results of the four basic operations, the earliest known collection of recreational math puzzles and problems, and the earliest book of math problems in Armenian. He also devised a system of mathematical notation based on the Armenian alphabet, although he was the only writer known to have used it.
Read more or edit on Wikipedia