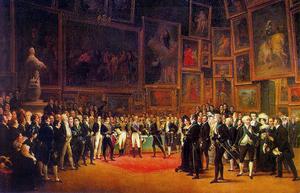 Alphonse de Cailleux, in full Alexandre Achille Alphonse de Cailleux but numerous variations exist (31 December 1788 – 24 May 1876) was a painter, connoisseur and arts administrator who became director of the Musée du Louvre and all the royal museums of France. Under the Bourbon Restoration. he was attached to the reconstituted royal household (maison du roi).
Read more or edit on Wikipedia