Amos Nathan Tversky (Hebrew: עמוס טברסקי‎; March 16, 1937 – June 2, 1996) was an Israeli cognitive and mathematical psychologist, a student of cognitive science, a collaborator of Daniel Kahneman, and a key figure in the discovery of systematic human cognitive bias and handling of risk. Much of his early work concerned the foundations of measurement. He was co-author of a three-volume treatise, Foundations of Measurement. His early work with Kahneman focused on the psychology of prediction and probability judgment; later they worked together to develop prospect theory, which aims to explain irrational human economic choices and is considered one of the seminal works of behavioral economics. Six years after Tversky's death, Kahneman received the 2002 Nobel Memorial Prize in Economic Sciences for the work he did in collaboration with Amos Tversky. (The prize is not awarded posthumously.) Kahneman told The New York Times in an interview soon after receiving the honor: "I feel it is a joint prize. We were twinned for more than a decade." Tversky also collaborated with many leading researchers including Thomas Gilovich, Itamar Simonson, Paul Slovic and Richard Thaler. A Review of General Psychology survey, published in 2002, ranked Tversky as the 93rd most cited psychologist of the 20th century, tied with Edwin Boring, John Dewey, and Wilhelm Wundt.
Read more or edit on Wikipedia 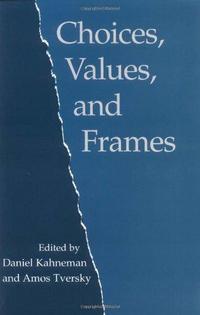 Availability: A heuristic for judging frequency and probability ( 1973 )

Prospect Theory: An Analysis of Decision under Risk ( 1979 )