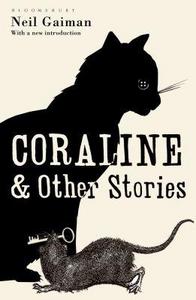 Coraline is a dark fantasy children's novella by British author Neil Gaiman, published in 2002 by Bloomsbury and Harper Collins. It was awarded the 2003 Hugo Award for Best Novella, the 2003 Nebula Award for Best Novella, and the 2002 Bram Stoker Award for Best Work for Young Readers. The Guardian ranked Coraline #82 in its list of 100 Best Books of the 21st Century. Gaiman started writing Coraline in 1990. The titular character's name came from a typo in "Caroline". According to Gaiman, "I had typed the name Caroline, and it came out wrong. I looked at the word Coraline, and knew it was someone's name. I wanted to know what happened to her." It has been compared to Lewis Carroll's Alice's Adventures in Wonderland and has been adapted into a 2009 stop-motion film, directed by Henry Selick. Coraline, has been noted to have derived from ‘La Belle Dame sans Merci’ by John Keats. The novel itself is an adaptation, ‘appropriation frequently effects a more decisive journey away from the informing text into a wholly new cultural product and domain’. However, the character ‘La Belle Dame’ has been adapted into the ‘other mother’ in Gaiman’s novel.
Read more or edit on Wikipedia