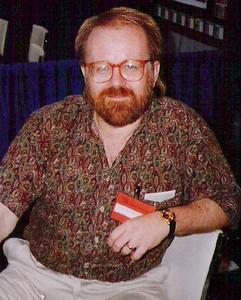 author and artist of comic books

John Lindley Byrne (; born July 6, 1950) is a British-born American writer and artist of superhero comics. Since the mid-1970s, Byrne has worked on many major superheroes, with noted work on Marvel Comics' X-Men and Fantastic Four as well as the 1986 relaunch of DC Comics' Superman franchise, the first issue of which featured comics' first variant cover. Coming into the comics profession as penciller, inker, letterer and writer on his earliest work, Byrne began co-plotting the X-Men comics during his tenure on them, and launched his writing career in earnest with Fantastic Four (where he also served as penciler and inker). During the 1990s he produced a number of creator-owned works, including Next Men and Danger Unlimited. He scripted the first issues of Mike Mignola's Hellboy series and produced a number of Star Trek comics for IDW Publishing. In 2015, Byrne and his X-Men collaborator Chris Claremont were entered into the Will Eisner Award Hall of Fame. He is the co-creator of such Marvel characters as Kitty Pryde/Shadowcat, Emma Frost, Sabretooth, Shadow King, Scott Lang, Bishop, Omega Red, and Rachel Summers, as well as the Canadian superhero team Alpha Flight.
Read more or edit on Wikipedia