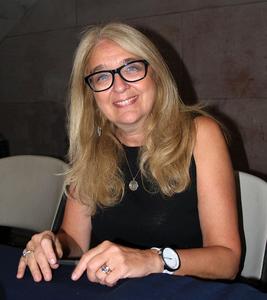 Ann Hood (born 1956) is an American novelist and short story writer; she has also written nonfiction. The author of fourteen novels, four memoirs, a short story collection, a ten book series for middle readers and one young adult novel. Her essays and short stories have appeared in many journals, magazines, and anthologies, including The Paris Review, Ploughshares, and Tin House. Hood is a regular contributor to The New York Times' Op-Ed page, Home Economics column. Her most recent work is "Kitchen Yarns," published with W.W. Norton and Company in early 2019. She is a faculty member in the MFA in Creative Writing program at The New School in New York City. Hood was born in West Warwick, Rhode Island. She now lives with her husband Michael Ruhlman and their children.
Read more or edit on Wikipedia