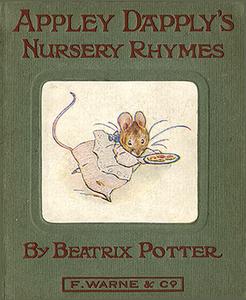 Appley Dapply's Nursery Rhymes is a collection of nursery rhymes written and illustrated by Beatrix Potter, and published by Frederick Warne & Co. in October 1917. Potter had a lifelong fascination with rhymes, and proposed a book of short verses called Appley Dapply to Warne following the release of The Tale of Peter Rabbit in 1902. Warne preferred Potter's original fantasies to her derivative work, and gave Appley Dapply little encouragement. The book was set aside in favour of other projects. In 1917 Frederick Warne & Co. suffered a scandal, and asked Potter for a book in an effort to stave off the firm's complete ruin. Potter was unwilling to become involved in the intense labour of preparing an entirely new book, and suggested the publisher raid the Appley Dapply dummy book prepared a decade and a half earlier. Seven rhymes with their accompanying illustrations were chosen and published as Appley Dapply's Nursery Rhymes. The book sold well. Modern critics consider Appley Dapply an uneven compilation of illustrations spanning decades and styles across Potter's career and suggest that it fails as a unified work. The rhymes of Potter's composition are critically considered not particularly memorable, and one critic has described the book as "the last squeezings of an almost dry sponge". Beatrix Potter's career as a children's author and illustrator was launched in 1900 when she revised a tale written in 1893 about a humanized rabbit, fashioned a dummy book in imitation of Helen Bannerman's 1899 bestseller Little Black Sambo, and privately published her work in December 1901 after a series of publishers' rejections. Frederick Warne & Co. had rejected the tale but, eager to compete in the burgeoning and lucrative small format children's book market, reconsidered and accepted the "bunny book" (as the firm called it) following the endorsement of their prominent children's book artist L. Leslie Brooke. Potter agreed to colour her pen and ink illustrations for the trade edition, and chose the then-new Hentschel three-colour process for reproducing her watercolours. On 2 October 1902 The Tale of Peter Rabbit was released.Potter continued to publish for Warne (usually two books per annum) and in 1905 bought Hill Top, a working farm of 34 acres (14 ha) in the Lake District, with profits from the sales of her books and a small legacy from an aunt. Her small format books thereafter took inspiration from the farm, its natural surroundings, and nearby villages. Her career came to an end in 1913 when marriage to William Heelis, the demands of an aged mother, failing eyesight, and the business of operating Hill Top prevented her from investing any time and attention in book production. She continued to publish sporadically after 1913, but her work lacked the brilliance of her earlier years and depended upon the retrieval of decades-old artwork and concepts rather than artistic growth and expansion.
Read more or edit on Wikipedia