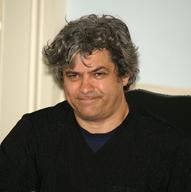 Arthur Nersesian is an American novelist, playwright, and poet. Nersesian is of Armenian and Irish descent. He was born and raised in New York City, and graduated from Midwood High School in Brooklyn, New York.His novels include The Fuck-up, Manhattan Loverboy, Dogrun, Chinese Takeout, Suicide Casanova and Unlubricated. He has also published a collection of plays, East Village Tetralogy. He has written three books of poems and one book of plays. In 2005, Nersesian received the Anahid Literary Prize for Armenian Literature for his novel Unlubricated. Nersesian is the managing editor of the literary magazine, The Portable Lower East Side, and was an English teacher at Hostos Community College, City University of New York, in the South Bronx. His novel Dogrun was adapted into the 2016 feature film My Dead Boyfriend. His novel The Five Books of (Robert) Moses is 1,506 pages long, took him more than 25 years to write, and will be published on July 28, 2020. Source: Wikipedia (en)