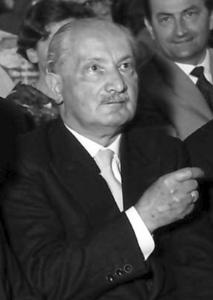 Martin Heidegger (; German: [ˈmaʁtiːn ˈhaɪdɛɡɐ]; 26 September 1889 – 26 May 1976) was a German philosopher who is best known for contributions to phenomenology, hermeneutics, and existentialism. He is among the most important and influential philosophers of the 20th century.In Heidegger's fundamental text Being and Time (1927), "Dasein" is introduced as a term for the type of being that humans possess. Dasein has been translated as "being there". Heidegger believes that Dasein already has a "pre-ontological" and non-abstract understanding that shapes how it lives. This mode of being he terms "being-in-the-world". Dasein and "being-in-the-world" are unitary concepts at odds with rationalist philosophy and its "subject/object" view since at least René Descartes. Heidegger explicitly disagrees with Descartes, and uses an analysis of Dasein to approach the question of the meaning of being. This meaning is "concerned with what makes beings intelligible as beings", according to Heidegger scholar Michael Wheeler. Heidegger was a member and supporter of the Nazi Party. There is controversy as to the relationship between his philosophy and his Nazism.
Read more or edit on Wikipedia