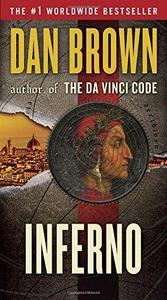 Inferno is a 2013 mystery thriller novel by American author Dan Brown and the fourth book in his Robert Langdon series, following Angels & Demons, The Da Vinci Code and The Lost Symbol. The book was published on May 14, 2013, ten years after publication of The Da Vinci Code (2003), by Doubleday. It was number one on the New York Times Best Seller list for hardcover fiction and Combined Print & E-book fiction for the first eleven weeks of its release, and also remained on the list of E-book fiction for the first seventeen weeks of its release. A film adaptation was released in the United States on October 28, 2016.
Read more or edit on Wikipedia