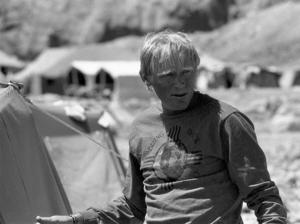 Anatoli Nikolaevich Boukreev (Russian: Анато́лий Никола́евич Букре́ев; January 16, 1958 – December 25, 1997) was a Russian Kazakhstani mountaineer who made ascents of 10 of the 14 eight-thousander peaks—those above 8,000 m (26,247 ft)—without supplemental oxygen. From 1989 through 1997, he made 18 successful ascents of peaks above 8000 m. Boukreev had a reputation as an elite mountaineer in international climbing circles for summiting K2 in 1993 and Mount Everest via the North Ridge route in 1995, and for his solo speed ascents of some of the world's highest mountains. He became even more widely known for saving the lives of climbers during the 1996 Mount Everest disaster. In 1997, Boukreev was killed in an avalanche during a winter ascent of Annapurna in Nepal. Boukreev's companion, Linda Wylie, edited his memoirs and published them in 2002 under the title, Above the Clouds: The Diaries of a High-Altitude Mountaineer.
Read more or edit on Wikipedia