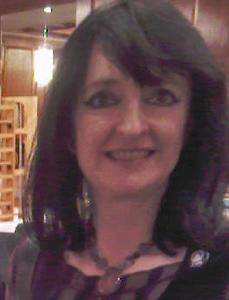 Freda Warrington is a British author, known for her epic fantasy, vampire and supernatural novels. Four of her novels (Dark Cathedral, Pagan Moon, Dracula the Undead, and The Amber Citadel) have been nominated for the British Fantasy Society's Best Novel award. Dracula the Undead won the Dracula Society's 1997 Children of the Night Award. Her novel, Elfland, won the Romantic Times Reviewers' Choice Award in the Fantasy Novel category for 2009. Warrington has also seen numerous short stories published in anthologies and magazines. Born in Leicester, Warrington grew up in Leicestershire. After completing high school, she trained at the Loughborough College of Art and Design and afterward held a job at the Medical Illustration Department of Leicester Royal Infirmary. She eventually moved to full-time writing, pursuing a love she had had since childhood. In addition to her writing, Warrington works part-time in the Charnwood Forest. Some of her books are set in Leicestershire, such as the recent Aetherial Tales series, depicting the lives, loves and adventures of magical people living hidden in this region, passing for - and sharing many cultural traits with - ordinary English people.
Read more or edit on Wikipedia