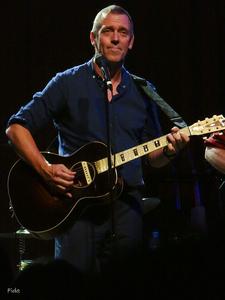 James Hugh Calum Laurie (; born 11 June 1959) is an English actor, author, comedian, director, musician and singer. He is known for portraying the title character on the medical drama television series House (2004–2012), for which he received two Golden Globe Awards and nominations for numerous other awards. He was listed in the 2011 Guinness World Records as the most watched leading man on television and was one of the highest-paid actors in a television drama, earning £250,000 ($409,000) per episode of House. His other television credits include arms dealer Richard Onslow Roper in the miniseries The Night Manager (2016), for which he won his third Golden Globe Award, and Senator Tom James in the HBO sitcom Veep (2012–2019), for which he received his 10th Emmy Award nomination. Laurie first gained recognition for his work as one half of the comedy double act Fry and Laurie with his friend and comedy partner Stephen Fry, whom he met through their mutual friend Emma Thompson while attending Cambridge University, where Laurie was president of Footlights. The two men acted together in a number of projects during the 1980s and 1990s, including the sketch comedy series A Bit of Fry & Laurie and the P. G. Wodehouse adaptation Jeeves and Wooster. Laurie's other roles during this time include the period comedy series Blackadder (in which Fry also appeared) and the films Sense and Sensibility (1995), 101 Dalmatians (1996), The Borrowers (1997), and Stuart Little (1999). Outside of acting, Laurie released the blues albums Let Them Talk (2011) and Didn't It Rain (2013), both to favourable reviews, and authored the novel The Gun Seller (1996). Among his honours, Laurie has won three Golden Globe Awards and two Screen Actors Guild Awards, and has been nominated for 10 Primetime Emmy Awards. He was appointed OBE in the 2007 New Year Honours and CBE in the 2018 New Year Honours, both for services to drama.
Read more or edit on Wikipedia 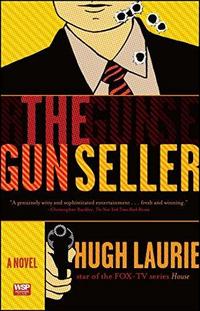