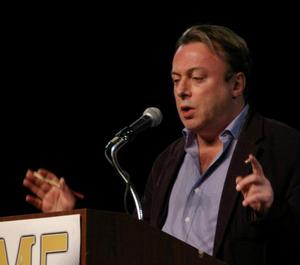 Christopher Eric Hitchens (13 April 1949 – 15 December 2011) was a British-American author, journalist, orator and columnist. He wrote, co-wrote, edited or co-edited over 30 books, including five of essays on culture, politics and literature. Hitchens originally described himself as a democratic socialist, and he was a member of various socialist organisations throughout his life, including the International Socialists. Hitchens eventually stopped describing himself as a socialist, but he continued to identify as a Marxist, supporting Marx's materialist conception of history. Hitchens was very critical of aspects of American foreign policy, such as American involvement in war crimes in Vietnam, Chile and East Timor. However, he also supported the United States in the Kosovo War, the Afghanistan War, the Iraq War and other military interventions. Hitchens described himself as an anti-theist, who saw all religions as false, harmful and authoritarian. He argued for free expression and scientific discovery, and asserted that they were superior to religion as an ethical code of conduct for human civilisation. He also advocated separation of church and state. The dictum "What can be asserted without evidence can also be dismissed without evidence" has become known as Hitchens's razor.A heavy smoker and drinker since his teenage years, Hitchens died from complications related to esophageal cancer in December 2011.
Read more or edit on Wikipedia