Bob Fingerman (born August 25, 1964) is an American comic book writer/artist born in Queens, New York, who is best known for his comic series Minimum Wage (Fantagraphics Books).In 1984, while still a student at New York City’s School of Visual Arts, he produced work for Harvey Kurtzman's short-lived young readers anthology Nuts! and signed a contract to produce a series of comical parodies of the Italian comic series RanXerox exclusively for the European market, including France’s L'Écho des savanes and Comics USA and Spain’s El Vibora. After he made friends with guys working at Forbidden Planet who were forming a ska band, The Toasters, he drew the front and back cover for their first LP in 1985. Fingerman worked in the disparate fields of children's satire, pornography and illustration, producing work regularly for Cracked magazine, SCREW, Penthouse, Hot Talk, Heavy Metal, National Lampoon, High Times, the Village Voice and other periodicals. In 1990, he decided to focus on comics. He did a year-long stint on the Teenage Mutant Ninja Turtles, as well as several titles for the Eros Comix line of adult comics, including Skinheads in Love (which drew praise from The Village Voice Literary Supplement) and Bloodsucker, a collaboration with punk icon Lydia Lunch. He also created covers and short stories for Dark Horse Comics and DC Comics’ Vertigo imprint.In 1993, Fingerman wrote and drew his first graphic novel, White Like She, a science fiction social satire about a middle-aged black man whose brain is transplanted into a white teenage girl's head.Upon completion of this purely fictional work, Fingerman decided to turn his attention inward. The result was the semi-autobiographical series, Minimum Wage (Fantagraphics Books), which in 2002 was collected and extensively reworked as the Fantagraphics graphic novel, Beg the Question (and which was nominated for both an Ignatz Award as well as two Eisner Awards).Fingerman has broadened his palette, turning to prose, and continuing to work in comics. His books include the humor collection You Deserved It; Zombie World: Winter’s Dregs & Other Stories, the zombie graphic novel; Recess Pieces (described on Fangoria's website as "The Little Rascals meets Dawn of the Dead"); and his debut prose novel, Bottomfeeder. In 2009, his releases included the trippy illustrated novella Connective Tissue. In March 2010, his satirical post-apocalyptic "speculative memoir" From the Ashes was released as a graphic novel. In August 2010, Pariah, a dark comedic look at people surviving a zombie onslaught, was published by Tor Books. Pariah is the second of Fingerman's prose novels. His most recent collection is the definitive "Maximum Minimum Wage" (April 2013) from Image Comics. Work on that collection reignited Fingerman's desire to continue that story. Minimum Wage resumed all-new for issues in 2014. Minimum Wage, Focus on the Strange (Image, October 2014) collects the first arc of the all-new material. 2014 also saw the release of the 20th anniversary edition of Fingerman's first graphic novel, White Like She.
Read more or edit on Wikipedia 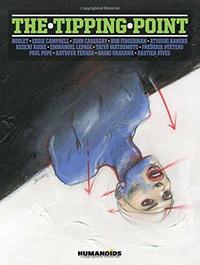